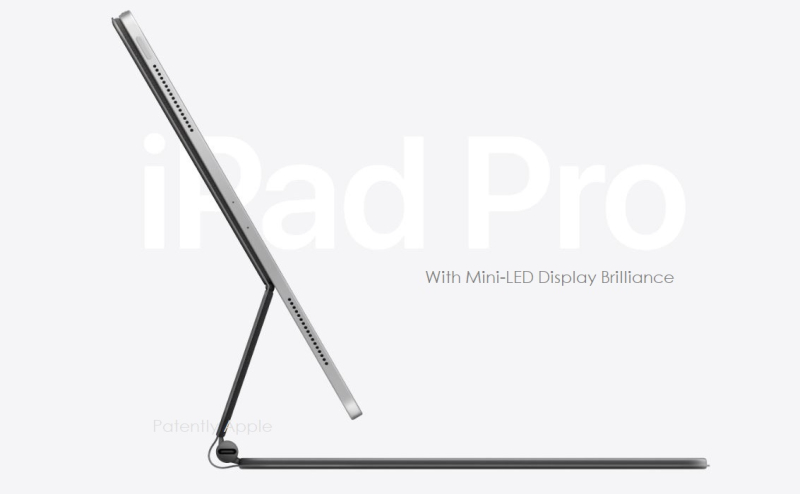 Back in July Patently Apple posted a report stating that Apple supplier LG would be supplying Apple with mini-LED displays for future products. More specifically, the report noted that the latest investigations by the LEDinside research division of TrendForce, Apple is expected to not only release its 12.9-inch, Mini LED backlight-equipped iPad Pro, but also open contract bids for its 14-inch and 16-inch MacBooks in 1Q21.

This news seems to have rattled Samsung who is currently Apple’s leading supplier of displays for iPhones and iPads. A report out of South Korea today states that Samsung Electronics has begun making preparation for mass-production of Mini-LED backlight LCD TV (Mini-LED TV). It is reported that the company is already working on production lines of Mini-LED TV in Vietnam and that the company is getting close to launching Mini-LED TVs shortly.

According to the industry on November 15, Samsung Electronics is currently working on manufacturing facilities for Mini-LED TV in Vietnam.

Samsung’s recent investment in Mini-LED TV production lines indicates that it plans to mass-produce Mini-LED TVs and shows its intention to grow its Mini-LED TV business. It is reported that Samsung Electronics plans to ship two million Mini-LED TVs in 2021.

More importantly, commercialization of Mini-LED TVs by Samsung Electronics is expected to serve as opportunities to spread Mini-LED technology and vitalize related industries. Apple is also preparing to include Mini-LED backlight LCD for its iPads and MacBooks and it currently receiving Mini-LED backlight LCDs from LG Display. Because LG Electronics is also preparing to launch its own Mini-LED TVs, 2021 is expected to be the first year of the commercialization of Mini LED.

At start, Samsung Electronics plans to ship two million Mini-LED TVs in 2021. This could lead to producing displays for smartphones, tablets and other products in subsequent years should their dive into Mini-LED TVs becomes a success in quality.

Further, related parts and materials industries are also expected to be vitalized as Samsung and Apple actively use Mini LEDs for their products. While the global LED industry is currently going through a slump due to oversupply from Chinese companies and fierce competitions, it is potentially looking at a rebound due to the spread of Mini LED technology.

South Korean market researcher, Stone Partners, stated for the report that “It is important to secure a stable supply network of LED chips in order to make competitive Mini-LED backlight displays. This is the reason why top display manufacturers and companies such as Samsung Electronics, Apple, TCL, and BOE are pushing for technology partnerships with China-based Sanan and Taiwan-based Epistar that are the top two LED chip makers in the world.”